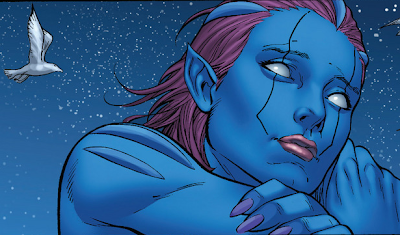 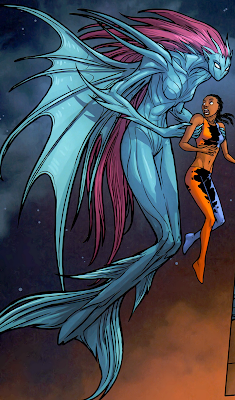 Now, I have to admit that this girl was a new one on me. I know my blue chicks, and her showing up in my latest round of searches was a pleasant surprise. Laurie was introduced by Marvel in July of 2010. She was supposedly loosely based off of the original Angel from the X-Men.

I can maybe see Archangel, what with the blue and purple, but honestly. Angel has nothing on Laurie.

And, according to some people, Laurie has nothing on.

Don't get me wrong, I don't mind a blue chick running around in her skivvies. And, I don't mind blue skinned chicks appearing to have no clothes on, but not showing off their naughty bits in a proper manner. And, since she is loosely based off of Angel, and everyone knows REAL Angels have no private parts, then it makes perfect sense for her to not have anything showing, and nothing in the way of clothing appearing to be on her body.

You know, a couple of posts ago, I mentioned that I might take this hobby a bit too seriously. It's times like this that I mean it most.

Since I don't really know this chick, I can't really wax eloquent about her for much longer. I'll take my leave with a couple of my favorite action shots of her. I'm sure that as she gets older (she's not even three yet, remember!) there will be more fodder for the mill. Until then, she has already provided us with some great shots, and I'm looking forward to seeing more of her in the future. 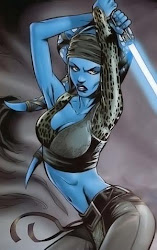